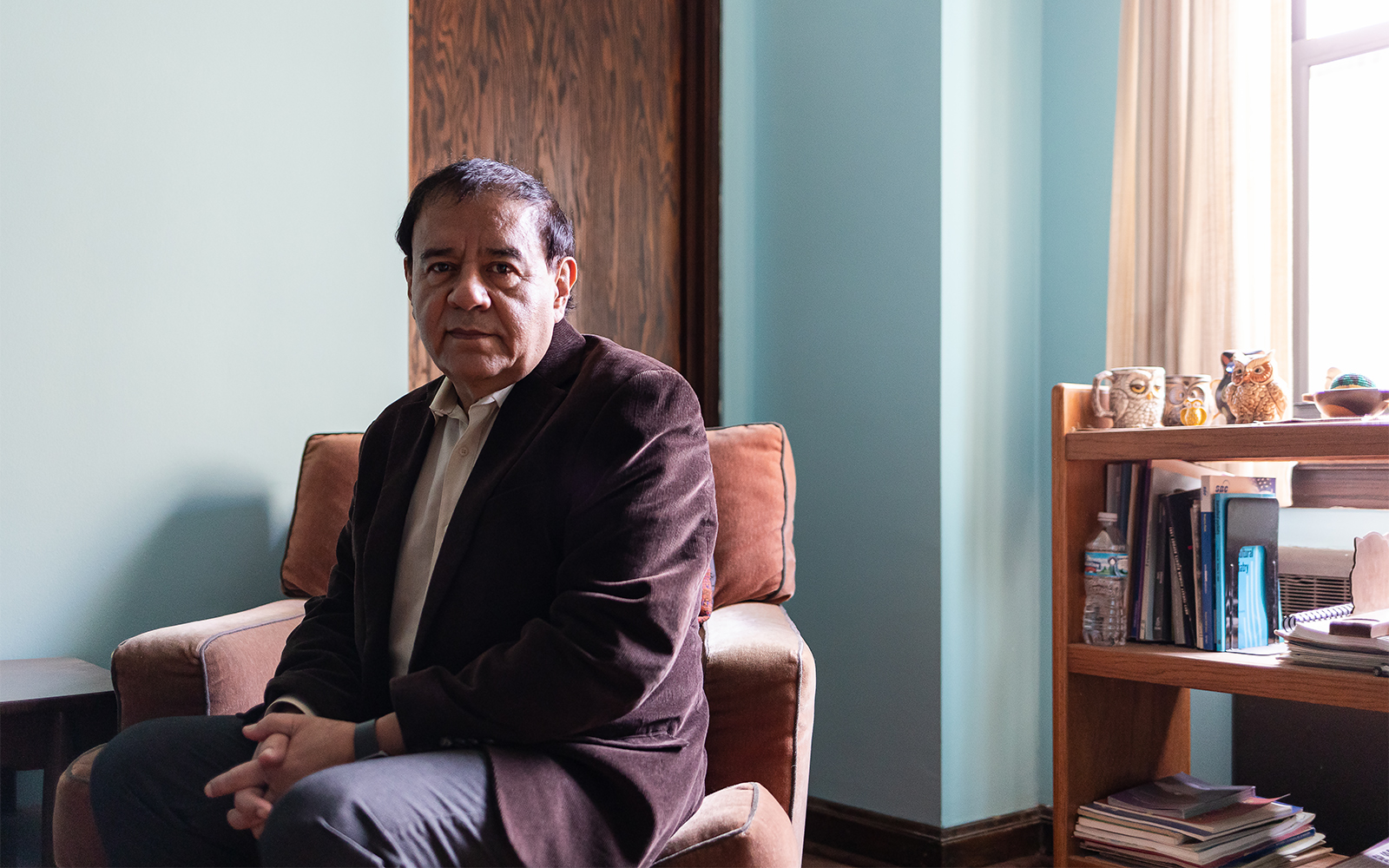 When former senator, secretary of state, and presidential candidate Hillary Clinton acted as keynote speaker for Heartland Alliance’s annual Power of Healing benefit in 2019, she lauded the work of the Chicago-based Marjorie Kovler Center, a thirty-five-year-old organization that has provided mental and medical support for refugees and survivors of torture from all around the world.

In her speech, Clinton quoted Mario Gonzalez, who is the former clinical supervisor and current senior director of Heartland International’s programs in the US as well as an advocate for those displaced by events outside of their control. “Since 1987, the center has stood as a bulwark against hate,” Clinton said. “As Mario Gonzalez says, ‘This is not charity—this is solidarity.'”

As can be expected of a man who has devoted his entire life to the unburdening of suffering, Gonzalez doesn’t even mention being quoted by one of the most famous and recognizable politicians in the world during his interview with Guerrero Media. Now well into his sixties, Gonzalez is reluctant to name a single other experience in his career that has stuck with him. As he puts it, that’s like asking a parent to name his favorite child.

Gonzalez has dedicated himself to supporting refugees and survivors of torture who come to the United States—a country most wouldn’t have chosen to come to had they not been forced to flee for their lives—in search of safety and succor. His care and compassion for the literally thousands of lives he has touched is as clear and present as the massive grin that overtakes his face when his youngest grandchild (one of nine) toddles into the room wanting to see her abuelo.

“I have a little visitor,” Gonzalez says fondly. “I don’t know if she will let me continue. I worry that she will refuse.”

The small interruption comes just as Gonzalez reflects on the choices he made to get his own family out of harm’s way decades ago. The decisions he made on behalf of his family haven’t just enabled his grandchildren to grow up in an environment where the fear of government-sanctioned torture never has to cross their minds—it’s also enabled Gonzalez to be part of the healing process for people from more than ninety different countries through his work at the Kovler Center.

Under Gonzalez’s leadership, the Kovler Center has developed a groundbreaking form of therapy that pairs survivors and refugees with therapists and interpreters who work together to create individualized and culture-centered programs of care. Through these efforts, Gonzalez is helping survivors reassert control and dignity in their lives—a process he himself is very familiar with.

“You are being punished for being forced to escape a country you did not want to leave, for leaving your life, your culture, your language, everything behind.”

Drops in the Glass

There wasn’t one single event that motivated Gonzalez to get his family out of Guatemala. A long-running civil war had wreaked havoc on the country for decades, resulting in widespread turmoil and uncertainty. The Guatemalan government had also begun targeting unions. Then teachers and university professors. Then students. It was a witch hunt for dissenters, a campaign of indiscriminate violence that knew no bounds. Gonzalez had friends, family, and instructors who, even if they did return from imprisonment, came back as different people.

“I think it was a collection of all these little drops in my glass,” the senior director reflects. “I had a couple situations where I had to escape with my children from sulfur attacks. There were just all of these things happening that I might have tried to tolerate if I were a single man. But I had to get my children out of there.” 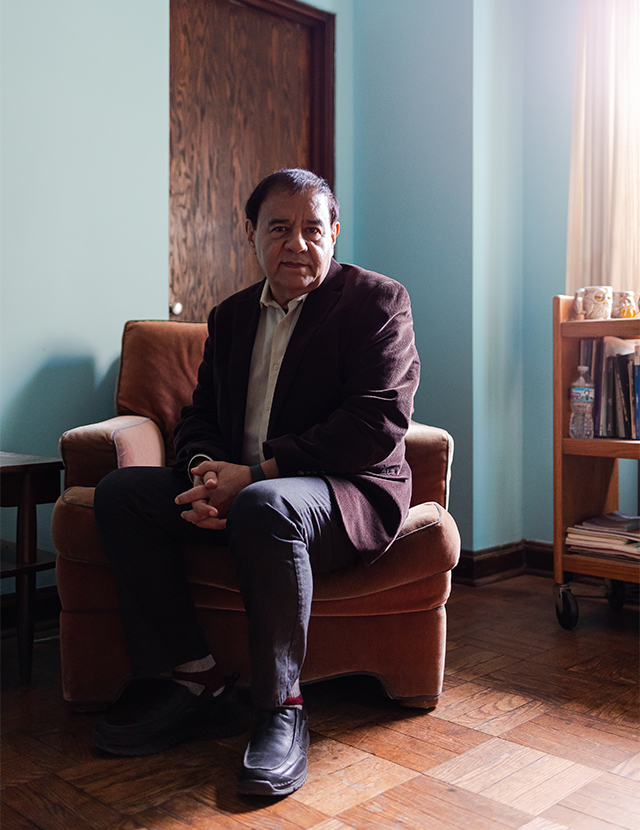 Gonzalez was able to escape with his family to Chicago, where his sister (who had escaped a few years prior) lived. He began teaching civics classes for refugees, but it was actually the parties frequently thrown by students and staff that would help define the rest of Gonzalez’s career.

“I was always getting invited to parties, almost weekly,” Gonzalez recalls. “Someone would always approach me with a beer, and we would start talking. By the second beer, they would just casually mention the torture they had been subjected to, and we would wind up in another room talking about their experience.”

He isn’t sure why, but Gonzalez has always been the kind of person that people open up to. He remembers befriending a developmentally disabled student in grade school, standing up for him when no one else would, and connecting with the student on a human level.

“I’m not necessarily a very dogmatic person, but I do often wonder whether this was always my call or my mission,” Gonzalez reflects.

Those conversations motivated Gonzalez to make a change and bring together groups of refugees who could share their stories and unite in community and culture in a country that often treated them like they didn’t belong.

“I would ask you to think of people who were professionals in their home country,” Gonzalez says. “You come here through no fault of your own, your education is useless because you are from what is described as an ‘undeveloped country,’ and you are seen as a vagrant who is here to take advantage of this country. These things destroy your dignity. You are being punished for being forced to escape a country you did not want to leave, for leaving your life, your culture, your language, everything behind.”

Gonzalez’s work would eventually sync up with the soon-to-be-established Kovler Center, where Gonzalez not only found a home for his groups but was also given the chance to establish new forms of therapy for people from all walks of life who had found themselves refugees.

Research from the Center for Victims of Torture suggests that upwards of 44 percent of refugees living in the United States are survivors of torture. Many organizations exist to support those individuals, but the Marjorie Kovler Center (and Heartland Alliance as a whole) are unique in their focus on flexibility and individualized therapy, which can range from art-, music-, and yoga-based therapy to more traditional clinical therapies.

“These people are from all different cultures, religions, and countries,” Gonzalez explains. “There is no unified approach. Our focus is on letting the approach be driven by the participants. We let humility lead, and we cocreate our treatment with our participants.”

That idea of “cocreation” is essential, Gonzalez says. In his experience, it’s disingenuous to assume objectivity or neutrality even from a professional therapist, who will inevitably carry their own biases into any setting. That is why it is critical for them to act as a “cocreator” of care and to let the participant’s culture, identity, and experience pave the way for treatment plans.

One of the most important (and most common) biases that Gonzalez and his team strive to address is the idea that the Kovler Center provides charity. “Charity disempowers people and puts them on a plane of assuming they are not capable of sustaining themselves,” Gonzalez says. “It’s giving them a gift or a handout and casting them out.

“Solidarity is exactly the opposite,” he continues, referring to the quote that Clinton included in her speech. “We will be with you as you strive to get where you need to be. You are a person just like us, no matter what you have been through or how dehumanized you may have been.”

That emphasis on solidarity is imperative to Gonzalez’s ability to help those who have experienced significant personal tragedy and support them in their journey to reclaiming control of their own narratives. Over the course of his career, he has worked with individuals from a variety of different backgrounds: some were fleeing from war in Vietnam or from civil wars in Central America. Others had fled from Eastern Europe during the Soviet occupation or the regime’s subsequent downfall. Many, many others had left the Middle East seeking refuge from the seemingly endless conflict in that area.

Despite those differences, Gonzalez saw commonalities in each person’s journey. “War is everywhere,” he says. “The weapons have changed, and we keep finding new and modern ways of killing each other. But the results are the same all over the planet.”

“Free your mind of your prejudice and try to meet people where they are, not where you would like them to be.”

But Gonzalez remains optimistic—he knows that what he and Heartland are doing is making a difference. Indeed, the Kovler Center and Heartland Alliance were able to help convince the US government to ratify the Convention against Torture and Other Cruel, Inhuman, or Degrading Treatment or Punishment in 1988 (four years after it was ratified by the United Nations). The Kovler Center and Heartland Alliance also fought hard for the government to allocate funds to support the healing of torture survivors. It was a pivotal moment for the organization that allowed its treatment and outreach to grow.

Gonzalez has also seen the number of volunteers and contributors to the Kovler Center increase exponentially during his tenure as clinical supervisor. The Center’s initial group of ten volunteers has blossomed into a community of 250 to 300 people who are passionate about refugee therapy and clinical services. Some people who started out as volunteers have become Gonzalez’s “right hand” as supervisors and managers in their own right, and that group has only continued to expand.

For anyone who may feel moved by this narrative to contribute in some way, Gonzalez points to a very simple way to make a difference: connecting with someone—anyone—on a basic human level.

“Free your mind of your prejudice and try to meet people where they are, not where you would like them to be,” Gonzalez says. “Just by talking with people, you become part of their journey. Whether you know it or not, treating them as a person makes you part of their healing.”