Teliane Bakala Has a Reason to Smile 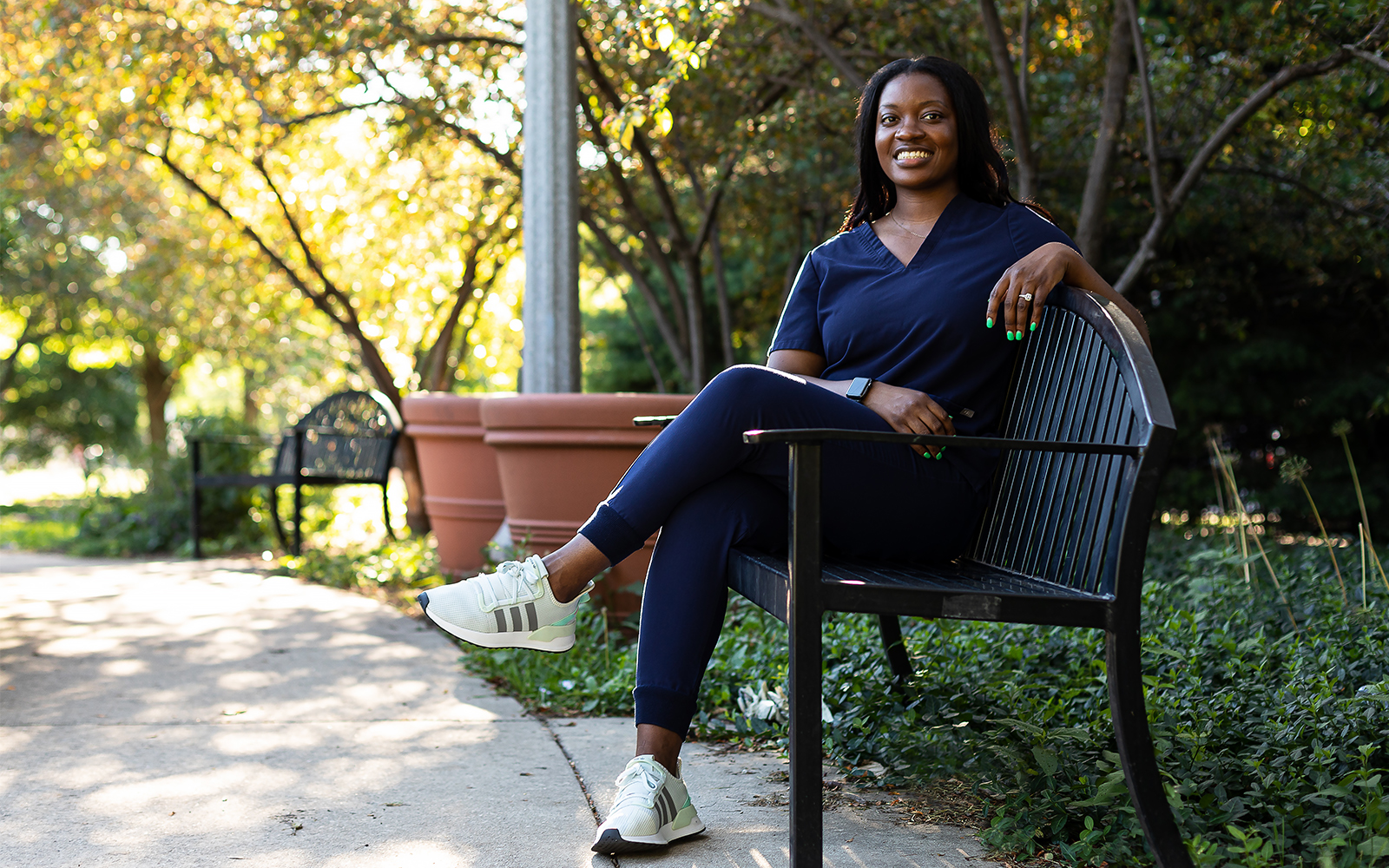 A conversation with Teliane Bakala is easy. The dental school student, who is in her final year at the University of Illinois at Chicago (UIC), laughs easily. More than that, she understands the importance of making a connection and the potential for a spark to become a fire.

In fact, before she was even accepted at UIC, the admissions officer was already on a first-name basis with Bakala: she was that determined to reach out, connect with the officer, and let her ambition and plans be known.

But these lessons have not come without difficulty. If Bakala seems to laugh easily, it’s only because she has not let her past overshadow her hope for the future.

In Search of Peace

Bakala’s family first fled the Democratic Republic of Congo when she was just two years old. The region saw two different wars between 1996 and 2003, and the dying state of Zaire—destabilized due to the Rwandan genocide, massive corruption, and unlivable conditions—played host to infighting between rebel groups, militias, and fighters looking to establish control of the region. Ethnic violence was cataclysmic, with hundreds of thousands left dead.

Bakala and her family fled during the First Congo War to the Ivory Coast, Côte d’Ivoire, on the southern coast of West Africa. Those are Bakala’s first memories. “Things felt more stable there,” she recalls. “My mom was a teacher, and my father was a physician. Everything was great until 2003.”

Unfortunately, that stability didn’t last. The First Ivorian Civil War raged for more than four years, and ethnic violence, massive casualties, and multiple warring factions were once again part of everyday life. It was too much for the Bakala family to endure. 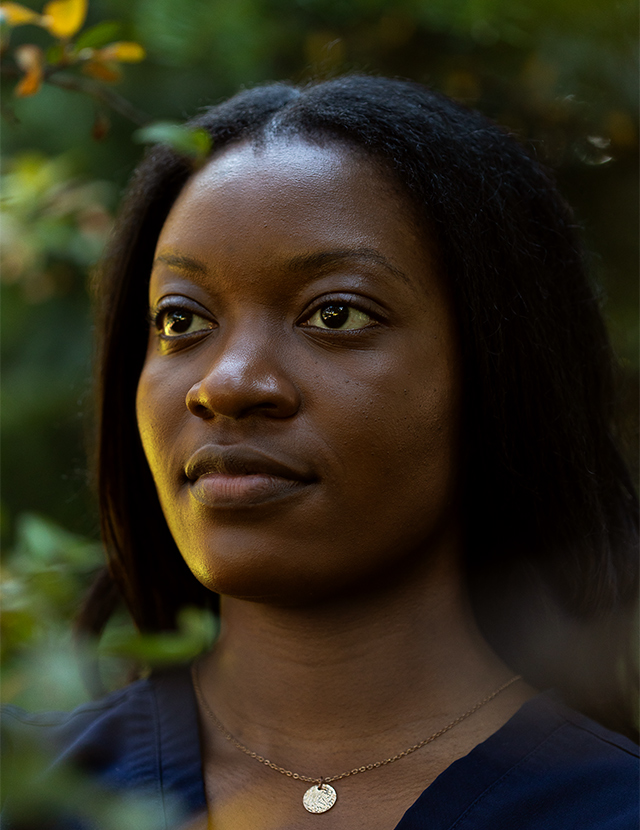 “My parents were young, and I give them a lot of credit for how they handled the situation,” Bakala says. “They reached out to refugee organizations in Europe and the US to try and make a better life for their family. We were able to come to the US in 2004 when I was eight years old.”

The family arrived in Chicago and took up residence in the Rogers Park neighborhood. Bakala’s father was unable to practice medicine in the US, but still worked hard to make a life for his wife and four children, working in a nursing home and eventually becoming a minister. Her mother became a successful hair stylist. The entire family worked hard to learn English and settle in, but it wasn’t easy.

In the early 2000s, Rogers Park could be both a haven and a hell. A Chicago Tribune story from 2009 quotes Bakala’s older brother Yoann as he details the story a family picnic that was interrupted by a fight between men wielding bats and chains. In a completely separate incident, Bakala was forced to duck down in the backseat of the family’s car when a man in the neighborhood began shooting at a police officer. Bullets darted past their vehicle.

“While those things were scary, my parents did an incredible job of keeping us safe,” Bakala says. “I felt like my friends witnessed a lot more than I did, because my parents made sure I was either at home or at school.”

School was another challenge. Teasing and bullying were regular occurrences for a dark-skinned girl who didn’t initially speak English and whose clothing wasn’t exactly in line with current trends. But Bakala would eventually find a community whose experiences were more in line with her own.

Bakala began attending the after-school program at Heartland Alliance, where she regularly interacted with refugees and children who had fled their own countries in search of a safer life.

“I finally came across some other kids who were facing some of the same challenges I was,” Bakala remembers. “There were people from Sudan, Nepal, all over, but we were all encountering the same sorts of issues here in the US—bullying, and just feeling like we were somehow different. At Heartland, we were able to interact. We may not have even been able to verbally communicate with each other, but we were able to interact and come together. It was a safe space for all of us.”

It was at Heartland where Bakala encountered her first real mentors, college students who would come to the organization to donate their time and spend time teaching and playing with the students.

Those mentors, with whom Bakala still stays connected with via Facebook, made a lasting impact on her and were critical in helping her adapt to her life in the US. Not everyone in this new place was a bully, she realized. There were people that wanted to help. And fortunately, there would be many, many more. 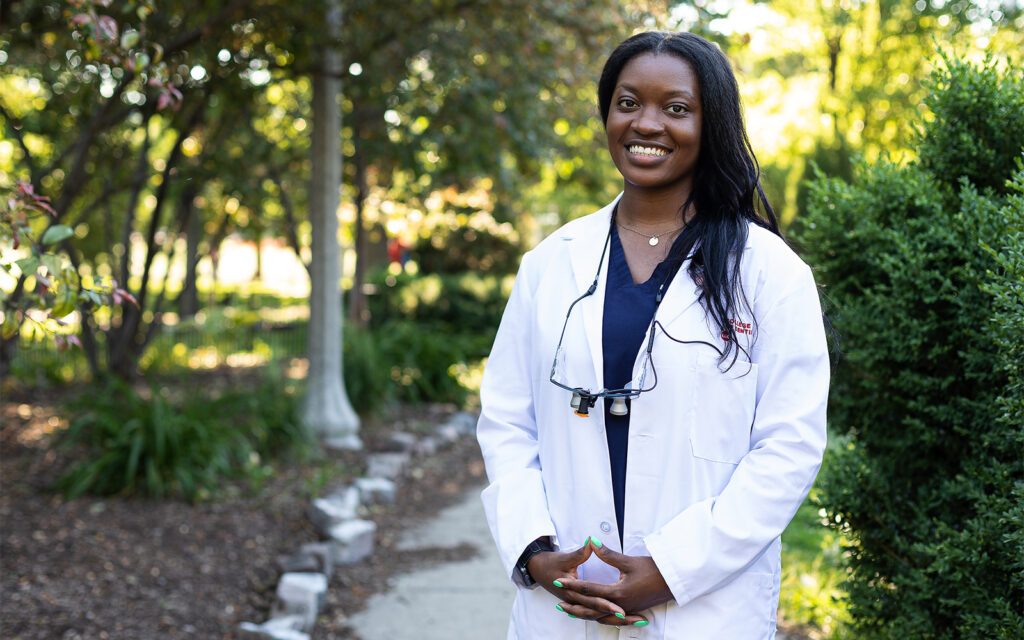 Bakala blossomed. She participated in sports and was a member of the National Honor Society and a multitude of additional clubs and organizations. Her teachers encouraged her, pushed her, and believed in her.

“Whenever there was a science fair or a competition, they would tell me, ‘Oh! You should do that! Here’s how,’” Bakala says. “When I was selected for a seminar at the Air Force Naval Academy, my school paid for my ticket to Colorado. I’ve kept finding people throughout my life who have helped me find a way, a resource, or another person who can help.”

With the help of her mentors, teachers, and supporters, Bakala earned a full ride to college. There, for the first time, she was able to connect with her African heritage. She’d spent her whole life trying to adapt, but now she had the opportunity to become truly herself. She found herself at home at her university’s African association, finding like-minded friends who, for perhaps the first time in years, felt truly proud of who they were.

It took a while for Bakala to know what direction she wanted to take her career in, but once she decided on dentistry, she didn’t turn back.

Before she even applied to dental school, Bakala started showing up at local dental clinics in the hope that they would allow her to observe and learn more about the field. “I would just go up to the desk and ask if they allowed people to come in and watch people work,” she remembers. “I must have gone to six different clinics, getting turned down. But then I met Dr. Escobar.”

When Bakala entered the offices of Dr. Dennis Escobar, the dentist was standing at the front desk, surrounded by hygienists and dental assistants, examining a computer screen. Bakala offered up her pitch, expecting the same answer she’d gotten a half-dozen times before.

“But I think Dr. Escobar saw himself in me,” Bakala says. “I think it’s something he would have done at my age.” She was in, and the experience helped push her to apply and enter the dental program at UIC. 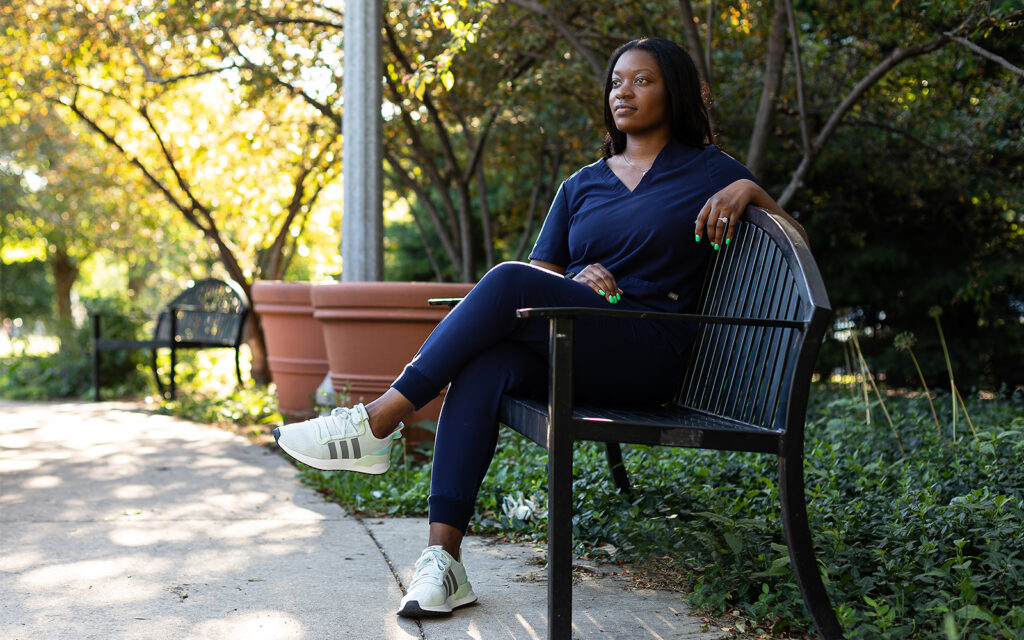 “I think my family’s journey just demonstrates that wherever life takes you, you need to buckle up and make the best of it. My parents didn’t give up, and I won’t either.”

The Chance to Give Back

As a beneficiary of UIC’s Schweitzer Fellowship, Bakala is now finding ways to give back to those who have supported her in her journey. The Schweitzer fellowship, she explains, requires charitable contributions to organizations of the fellow’s choice. Bakala didn’t have to think very hard to know she wanted to support Heartland Alliance.

The dentist-in-training has come back to Heartland to teach students about oral hygiene and the importance of brushing their teeth. She’s provided free dental products like brushes and floss. No matter who she speaks to—young or old—Bakala strives to ensure that everyone understands just how badly they don’t want to end up in dentures.

Bakala is also a friendly face, someone who is able to connect with Heartland kids on a truly personal level. Their experiences, no matter how different, are united in a struggle that very few can understand. But Bakala’s mere presence at the organization is an indication to students that no matter how hard the struggle has been, something truly amazing can come from it.

“I just hope that I can be a mentor and show people that there is a way to accomplish your goals in life,” Bakala says. “You have to get out there, be a go-getter, and talk to people. You’ve got to make those connections. That’s how life works, and I hope I can inspire people to pursue their dreams.”

Bakala’s whole life is ahead of her. She’s engaged (to another dentist), and has been regularly doing outreach to pediatric dental programs where she can achieve her goals. The rest of her siblings are successful as well, with loving families and fulfilling careers. Bakala’s parents remain married and happy.

“I think my family’s journey just demonstrates that wherever life takes you, you need to buckle up and make the best of it,” Bakala says. “My parents didn’t give up, and I won’t either.”

Emma Yaaka Is a Guide for the Journey